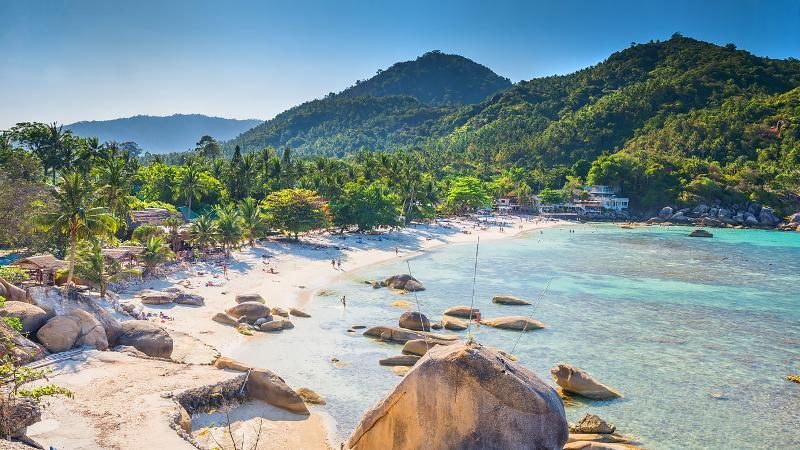 Let’s retrace the history of Koh Samui, which was visibly uninhabited until the 6th century, and was then colonized by fishermen from Malaysia and southern China. It can be found on Chinese maps from 1687 under a different name: Pulo Cornam. The origin of its current name remains a mystery. According to some sources his name Koh Samui could come from the name of one of the local trees, “mui”, or the Chinese word “saboei”, which means “safe port”. Koh is a Thai word meaning “island.” Koh Samui is nicknamed the “Pearl of the China Sea”, the island has only experienced a rather late development. It was populated by a self-sufficient and isolated fishing community until the end of the 20th century. Until the late 1980s, the roads present were only dirt tracks, as can be seen by the first tourists coming to discover this corner of paradise. A full day of walking through the jungle of the mountains, they were needed to cross the 15km of the island.

Koh Samui is a paradise island located in the Gulf of Thailand. Exactly located in the southern part of the Kra isthmus, this island belongs to the Surat Thani province and enjoys tropical and pleasant weather.
It is only 25 km from the Thai coast and is accessible by boat or plane – it is, the second largest island in Thailand, after Phuket, with a total area of 228 km2 and a population of about 62,500 inhabitants (Thai or foreign). It enjoys many natural tourist resources: white sand beaches, corals and coconut trees – and also many natural agricultural resources: exotic fruits, rubber and noble woods.
The island is located in the center of a small archipelago of 85 islets of which 6 are inhabited. This archipelago then includes Mu Ko Ang Thong National Park (the Golden Bowl Islands) and Koh Pha Ngan, also very touristy and lively, just a few kilometers further north.
Koh Samui has a circular shape (25 km x 21 km) and its highest peak is 656 meters high. The mountains of the island are covered with a tropical jungle, home to an extraordinary flora and fauna. The plains are mainly connected by a 51 km road that follows the coastline.
The name of each of the island’s main beaches is linked to a city of its own; the four largest cities being Bophut, Lamai, Maenam and Nathon.
Koh Samui is a beautiful location of hotels, restaurants and nightclubs.

Check out more historical photos of Koh Samui by clicking on this link.

You would like to move to Koh Samui? Check out our shops for sale here.

How do I become a homeowner in Thailand?

The investment benefits in Thailand

This site uses Akismet to reduce spam. Learn how your comment data is processed.